Here's a few photos of St Patrick's night down at the Old Brown Jug in Newcastle with the Moody Food Ceili Band. I still haven't learnt how to take a photo and play at the same time but at least some of them are in focus this time around and not the usual psychedelic blur.

As it was St Paddy's night we mixed up the usual ceili chaos and added some songs with Candida guesting on vocals. We kidnapped Candy from white trash bluegrass pickers Plucked! but, as an act of kindness, we released her back into her truck after the gig. For those who like a bit of a bop we managed to fit in a couple of dances with Sue calling and playing fiddle – I know,  how hard can that be? For the Moody Food Dance Card completists amongst you they were Sue's No.1 and Sue's No.2 – with names like that you'd think she just made them up on the spot :-/ 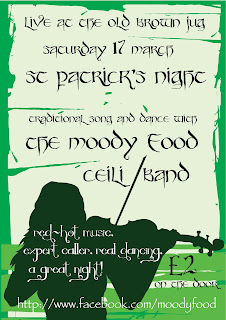