Thanks to everyone who came to see in the New Year with Moody Food, especially Neil from Jigsmith for coming all the way from Shropshire for a bit of a bop. You all helped us to raise £400 for the Douglas Macmillan Hospice.

We all had a great time (I especially liked the ceili conga at the end) and even managed to fix the raffle so that Emma won first prize – a first for the band. We were also treated to Victoria dancing a solo Irish reel with Sue playing the Nine Points of Roguery, otherwise known as The Nine Pints of Pedigree which is what we usually have to drink before attempting to play it. Also, thanks to Mike and Warren for taking the photos and to Roo and Indie for guarding the door by being cute.

It looks like this will be our last time at Brown Edge for some time as we will be seeing in the next new year at Betley – see you all there!


Christmas started early at Moody Food Towers when Wendy and the Lost Boys came down for a Christmas Ceili The Old Brown Jug. Look out for more Moody Food gigs at the jug in the new year! 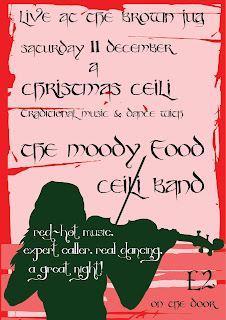