Eeek! I think I've gone deaf after standing in front of James' wall of sound for three hours (he was on  eleven all night). Still, it make a change to play The Gravel Walks without the worry of being asked to turn down. Thanks to everyone who put on their glad rags and dancing shoes to get jiggy at another night of ceili chaos at the Jug. We even got a few bemused clubbers dancing. Thanks to Soo for taking all the photos. 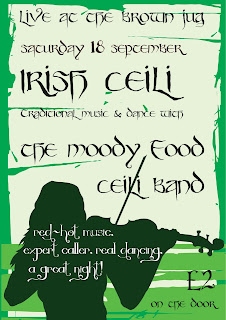 
Congratulations Tim and Tracey on your Silver Wedding Anniversary. What better way to celebrate twenty-five years together than with family and friends? As there were so many 'little ones' in the hall Sylvia decided top and tail the night with the Circassian Circle so that all the children could have a go at a really easy dance early in the night.

Emma brought along her new puppy, Indiana Bones, as the Moody Food mascot. He quickly made friends with everyone and was a very well behaved boy even though he did somehow manage to blag a bit of hog roast (don't expect that every gig, Indie). I on the other hand went straight for the cakes and after an eternity of dithering finally selected a Victoria sponge – bliss. Speaking of cakes, we get to see quite a few at gigs but this one takes some beating. It was too nice to cut other than a single slice for the photos of Tim and Tracy. 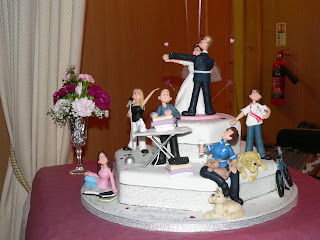 Here's a list of Sylvia's dances for your Moody Food Dance Card:

A jolly jaunt with StringFing up to Neston library on the Wirral for a bit culture amongst the books. We usually play in pubs, so it makes a nice change playing for people who are actually listening.

We were supported on the night by the rather wonderful, and frighteningly young, Red Voix – a family band formed especially for a GMTV competition.

According to the poster in the library this was a "toe-tapping fusion of traditional Celtic, English rural, classical, blues and rock and pop to get you going on a late summer evening" – so pretty much all tastes covered there! Anyway, this was the set list for the night:

Champion of the World
Down on Poison Farm
Winsford Town
Ram Yer Spike
Ballad of Francis Adams
Sad Song (Something Wrong)
Priest and the Witch
Exile’s Song
On A New Years Day
That Love of Mine
I Want You
Pity the Poor, Poor Pig
Talking Revolution
Big Pearl
Posted by Moody Food No comments: