A new venue for our new year celebration and it was wonderful to see so many people from our Brown Edge ceilis. The Betley bell-ringers left early to ring in the New Year and we all went out to listen after singing Auld Lang Syne but couldn't hear a single chime – apparently the wind was blowing in the wrong direction! We'll be back at Betley for New Year's Eve 2013 (no,  that's not a typo) – see you then. 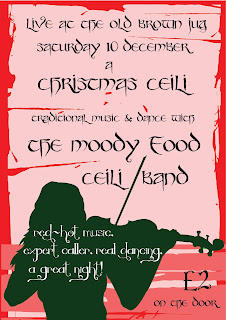 It's time to put on your festive dancing shoes, mark up your dance card and get ready to get jiggy as Christmas starts on Saturday 10 December when The Moody Food Ceili Band and caller Collin Higgs play their annual  Christmas Ceili at The Old Brown Jug, 41 Bridge Street, Newcastle-under-Lyme, ST5 2RY. Admission is £2 (free before 9pm) and the ceili chaos starts at 9.00pm.