Moody Food travelled up to Grappenhall – the posh end of Warrington – to celebrate Fiona's birthday. This was a bit of a re-match as we also played at Fiona's wedding back in 2003. The hall was filled with a forest of balloons and the children seemed to be having their own private backstage party when they weren't dancing. A great night with great food and we only managed to trip the noise meter three times. 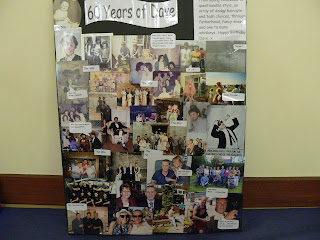 After yesterday's trip to Ashbourne Moody Food were  back on home territory at Meir Heath for another birthday ceili. Autumn seemed finally to have arrieved with the street lamps bathed in mist giving the journey to the hall an eery, Dickensian atmosphere.


60 years of Dave. From young innocence to questionable style, an array of dodgy haircuts and tash choices, through fatherhood, fancy dress and one too many whiskeys ...

This was our third trip to Ashbourne this year with Moody Food and it's beginning to feel like our second home. We've been playing at the annual Burns night bash at Ashbourne for a few years now along with the Ashbourne and District Pipe Band. David plays the bagpipes with the ADPB which explains the Saltire, tartan, and bagpipes on his cake but not the er... tractor.

Midnight on the Water / Waltz Vienna
Shebeg an Shemor / Give Me Your Hand
The Humours of Scarrif / Some Say The Devil is Dead
Cutting Bracken Strathspey and Jig / The Connaughtman's Rambles, Love in the Morning
The Glasgow Gallop
Discouraging Waltz / Ragtime Annie
Canadian Barndance
Goatland Square Eight
The Flying Scot
Molloy's Favourite / The Foxhunter / Cooley's Reels
The Gay Gordons
Fly Away / Turkey in the Straw / Seneca Square Dance
Waltz
Oxo Reel
The Lark in the Morning / Langstern's Pony
Circassian Circle
Auld Lang Syne