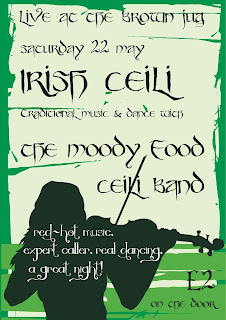 Thanks to everyone who came along and made our first gig at the Jug such a great night. See you all again in September.

Here's a list of Collin's dances for your Moody Food Dance Card:


Happy birthday Sam – we hope your party wasn't too much of a surprise.

It's always fun to play with a new caller and tonight we had Cate Bannister who brought along lots of new dances and fancy moves like 'threading the needle' and the 'star lady's chain' (same old tunes though). My favourite was Billy's Hornpipe with its 'reel of four' but we also had a fantastic and spotaneous reworking of Circassian Circle with a little girl at the centre of the circle and the women rushing in to tickle her and the men roaring like monsters. She probably had nightmares that night. Other than that all I can remeber is a lot of balloons and a mysteriously floating coke can. Bishy Barnabee is a southern name for a ladybird by the way.

Here are Cate's dances for your Moody Food Dance Card: 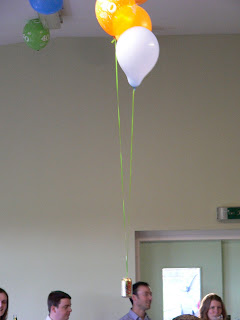 Congratulations to June and John on your belated wedding party.

With a hall full of ceili virgins, some tottering around on vertigo inducing heels (swiftly abandoned), ceili chaos ruled the dance floor, but there was to be no supper until everyone had got up and danced. John confessed that although he'd been to many a barn dance he had never actually participated before – we hope it won't also be the last time! So, well done everybody for giving it a go and well done little Lewis for managing to dance The Snowball with his Dad.

Lewis relaxes with a pint after mastering The Snowball. 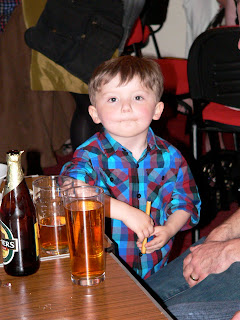 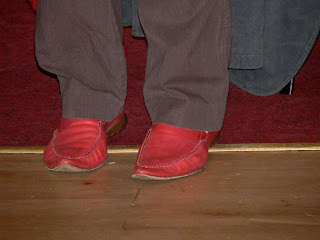 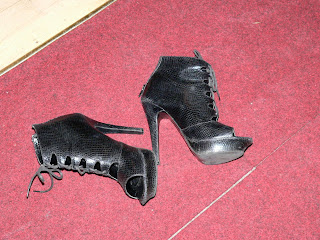