Congratulations Helen and Stephen on your wedding.

I didn't have time to look around the wonderful gardens at Consall Hall but the young crowd who came to share the day with Helen and Stephen made up for that loss with some lively and 'enthusiastic' dancing throughout the night (piggybacks in Clopton Bridge). For the man who wanted to know the names of the waltzes that we played, they were Sheebeg and Sheemore by the blind Irish harper Turlough O' Carolan (1670 – 1738) and Give me your Hand by Ruairi 'Dall' O' Cathain (c.1570 – c.1650).


Congratulations Hannah and Daniel. We remember a very little Hannah having violin lessons from Sue – how time flies. This is a very pretty venue for a wedding, looking out onto Rudyard lake (even though the drive down to it is a bit scary!)


This was also Emma's last gig with Moody Food before she sets off to travel around the world – good luck Em, we'll miss you. You can see what she's up to by following her blog, Roo and Emma's excellent adventure – awesome! 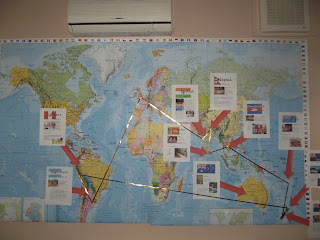 Moody Food played at Roo and Emma's fundraising / leaving party before they leave to travel around the world volunteering on community projects in Argentina, Peru, India, Nepal and just about everywhere in between. The evening raised around £400 to give to the charities they visit. You can follow their progress across the world on their blog, Roo and Emma's awfully big adventure. Good luck to the both of you.
Posted by Moody Food No comments:

A magical evening with the Growing Hearts and Minds Project at Northwood Parish Hall celebrating the turning of the seasons and the arrival of spring.

It all started with a lantern procession through Northwood park and ended up at the parish hall which was decorated with banners and lanterns. Here we had some wonderful food and were entertained with a shadow story, a rather strange ritual involving banging a nail into a man's head (don't try that at home), and the arrival of the snow bear to sweep away the winter – and everyone went home with a vegetable patch box of seeds. 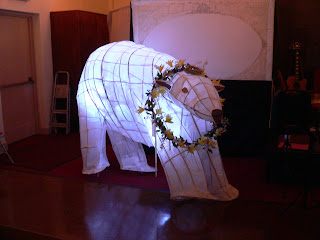 Music was provided by a scratch band comprised of guitar, bass, ukulele, mandolin, fiddle, harmonica, percussion and vocals which performed songs written at a series of songwriting workshops run by Aidan and Steve.Two songs were written by young people from the Changes music group – Rattle, Hum and Strum! – which is how I became involved. We wrote down things we liked about living in Stoke and Aidan knocked them into shape to produce a song. This is what we came up with – Aidan's version was sung to a three chord rockabilly chugalug beat whilst Mary's was slow and dreamy.

It's No Joke, Living In Stoke (Aiden's version)

Can you spare a bit of cash can you give a bit of money
For a big issue seller who's down on her luck
Thanks a million, morning duck
It's no joke when you're living in Stoke
And you can't pay the bills when you're stony . . . broke

The smog has gone, the jobs have too
We import china for the loo
Armitage Shanks isn't quite so flush
Doulton's winged it and Wedgewood's dust
Canals have dried up there ain't no barges
We just keep paying the community . . . charges

Stanley Matthews is smiling down
On the square with no fountain in the middle of the town
The Reginald Mitchell makes a pretty penny
Never was so much drunk by so many
The statues in the streets look pretty flash
But where is Lemmy and where is . . . Slash?

If you ever plan to cycle west
Go round Forest Park, that's the best
Down the Trent and Mersey and the Caldon Canal
Cycle real quick or cruise dead slow
Eat those butties when you're rolling back
But don't get knackered . . . with a flat

It's No Joke, Living In Stoke (Mary's version)

Big issue man outside M&S
Sentinel man with his little nest
Loss of jobs, loss of money
But at least in Stoke it's always homely


Ceili Crystallographers! Another conference gig at Keele, this time for the British Crystallographic Association. Funny that it always seems to be scientists who book us – doesn't anyone in the humanities like to have a bit of a bop?

We haven't played at Whitmore for some time so it was nice to be back, especially on such a beautiful spring evening, with blossom everywhere. You really know that the season is turning when you turn up to a gig in daylight. Hog roasts seem to be very popular these days – I wonder if anyone does a vegetarian option :-)

Here are Collin's dances for your Moody Food Dance Card: