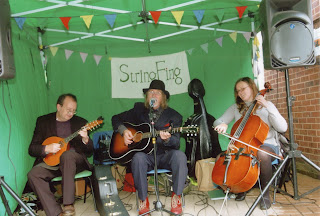 Woke up this morning and it was pouring with rain. StringFing back on the street at the Congleton Jazz and Blues Festival. We haven't played on the street since our busking days but we've moved on up in the world and now have a nice green gazebo thing to keep us dry. Thanks to everyone who braved the showers to listen to us. We're going to be inside next year!
Posted by Moody Food No comments: 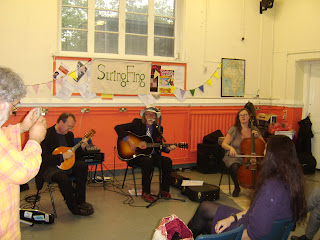 A short set from StringFing at the North Staffs African Caribbean Association (NORSACA) in Hanley as part of the artists' collective No Left Ear which promotes artistic and cultural projects between the cities of Stoke-on-Trent, Gdansk and Le Havre.

Our rather surprising link with Gdansk goes back to 1995 when an early incarnation of StringFing (then called 'Set The Milkmaids Free') went to Gdansk for a week of gigs. As far as I can recall we were paid in goldwasser (Polish vodka with little bits of gold floating in it), so memories are a little hazy but I do remember playing at The Bohemian Club. To gain access you had to go up some narrow stairs and knock on the door at the top at which point the gate master would peer through a spyhole and if he thought you looked sufficiently 'bohemian' would let you in.

I don't remember playing on Radio Arnet during the 1995 election but the photo below says that we did. In spite of our best efforts Lech Walesa lost the election – probably because of this broadcast. 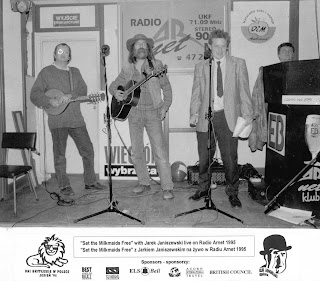 
Congratulations Claire and Paul from all in the Moody Food Ceili Band.

We had another guest caller tonight to guide everyone through the dances,  Jeff – an old pal and alumnus from the New Victoria Theatre – who brought with him a few new dances and a couple of different versions of some old favourites. I especially liked Jeff's instruction to 'clap, leap, and whoop with joy' in the Circassian Circle, which is how I think it should be done. There was also a determined effort from the floor to morph the Holmfirth Square Eight into the Hokey Cokey – probably from the same group who were to later give an impromptu and 'enthusiastic' acapella version of 'I Will Survive'.

As there was no stage and the band was so close to the dancing we had the unusual sense of being in amongst the dancers which probably explains why Sue's bow and assorted mic stands feature so heavily in the photos. It also allowed me to overhear one young lad emphatically rationing his mum to a single dance – bless. The girls, of course, needed no excuse to get up and dance the night away.

Here are Jeff's dances for your Moody Food Dance Card:

The Mohican is back!
Those of you who have been following the fortunes of Tom's Mohican haircut will be gladdened to know that reports of its demise last week have been greatly exaggerated and that it has now been restored to its former glory. We're all waiting for you to dye it shocking pink now. 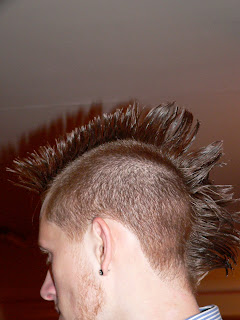