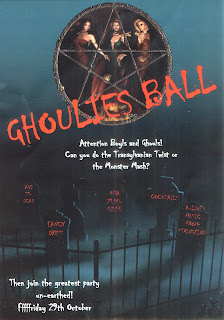 'When the full moon shines
On the village green
And ancient chimes
Strike thirteen . . .'

It was a bit early, I know, but I celebrated Halloween performing with StringFing at the Ghoulies Ball in the KPA up at Keele University. There were lots of pumpkins, witches and skeletons abroad and Terry and Emily got into the spirit of things by blowing the gig money on face paints from the Pound Shop. Emily changed into a witchy thing whilst Terry resurrected his Heymaker persona. For some reason neither of them thought that I required any modifying to get into character and that a cheap suit and a general demeanour of melancholia was horrific enough. The lack of a camera protects us all from the judgment of posterity.
Spike was AWOL as his son Doug had a play, Life Support, being staged at the Royal Theatre in York and, unaccountably, Spike preferred to be up there with him rather than with us. If York is too far away, you can catch the play at the KPA on Wednesday 10 November.
These days Halloween is not so much a Celtic festival when 'the summer goes to its rest' but a triumph of consumerism as it is has become the third biggest money-spinning festival after Christmas and Easter. For a gigging musician the ritual year can be both a blessing and a curse – bookings on these feast days, like buses, tend to come in threes. Only a musician can truly understand the trauma of refusing a gig, and thus money, because you are already booked.

It was well past the witching hour when I got home but the weird sisters were nowhere to be seen.
Posted by Moody Food No comments:

We set off westwards into a beautiful autumn sunset which made the whole world look like a  watercolour painting. I love travelling to gigs in the country at this time of the year. You can feel your consciousness shifting as you leave the town behind you; the light darkens and the lanes become narrower and narrower an everything becomes mysterious and exciting as if you are in a Samuel Palmer painting.

This was our second gig with Cate calling and she brought along lots of new dances again, mostly written by Cate herself, except for 'Wits Alive' which was by Hilda Evans. 'Turntable' was fantastic, with a great spinning figure for the couples and there were some new moves I've not heard of before such as the Californian twist, Becket's formation and the pousette which is posh for pushing and pulling your partner about.

It was a great night but I think a special mention should be made of Chris who organised the dance for STAG and spent most of the night in the kitchen sorting out the food whilst her husband danced the night away. Oh, did I mention – it was also their Wedding Anniversary! He doesn't deserve you Chris ;-)

Here are Cate's dances for your Moody Food Dance Card:

I have a little confession to make. I nearly made a terrible faux pas during the evening. After we had set up for the gig I noticed an artfully constructed pyramid of pretty cup cakes by the entrance. How considerate of Wendy and Maria to provide a little snack for their guests as they arrived I thought. Well you know how awkward that period between tea and supper can be, when only something sweet will do. I was about to help myself to one or three when I remembered that treacle sponge and custard was on offer later and so with heroic self control I refrained. I was very glad that I did because during the singing of Happy Birthday I realised that the pyramid was the birthday cake as it was ceremoniously brought into the hall for Wendy to blow out her candles. Sorry about that. 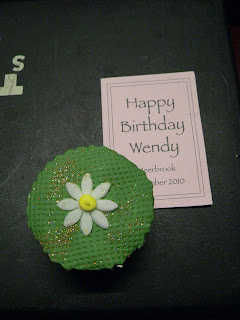